‘…We believe that the sale and of tobacco, alcohol and other nonmedicinal drugs is a social evil which is draining and corrupting to society, and thus we believe that the best position is to practice total abstinence, protesting both the legal and illegal trade of such substances.’

‘Those admitted to membership in our churches commit themselves to demonstrate their life in Christ in such ways as: …
To demonstrate a positive social witness by abstaining from all forms of gambling and by abstaining from using or trafficking (production, sale or purchase) in any substances destructive to their physical, mental and spiritual health, such as alcoholic beverages, tobacco and drugs (other than proper medical purposes of drugs)’

‘We oppose the production, sale, purchase and use of alcoholic beverages, tobacco, narcotics, and other harmful drugs, unless for mechanical, chemical, or medicinal purposes (cf. 265:4). The unprescribed use of hallucinogens, stimulants, and depressants, and the misuse and abuse of regularly prescribed medicines should be prohibited; only on competent medical advice and under medical supervision should such drugs be used. The consequences to society stemming from substance abuse are of major concern because of their unarguably negative impact on the spiritual character and nature of individuals and the welfare of society. These include the creation of barriers to conversion, family dysfunction and breakdown, poverty, disease and death, increased violence and crime, the incalculable loss to national economies, and the destruction of the individual caught by the power of addiction. In light of the overwhelming evidence of damage to society and the spiritual health of the individual by the abuse of such substances, we believe that even where their use may be legalized, we choose total abstinence as our appropriate response…’

‘Only unfermented grape juice shall be used in observing the Lord’s Supper.’

‘Are you prepared, in the name of our heavenly Master, to stand forth for a new anti-slavery, anti-intemperance, anti-every-thing wrong, church organization?’ —Rev. Orange Scott in 1842

The first Wesleyan Methodist Discipline in 1843 included General Rules against “Drunkenness, or the manufacturing, buying, selling or using intoxicating liquors, unless for mechanical, chemical, or medicinal purposes; or, in any way, intentionally and knowingly, aiding others so to do.” 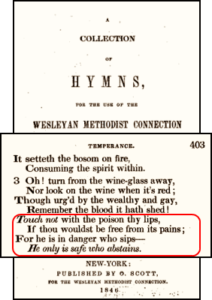 ‘Touch not with the poison thy lips,
If thou wouldst be free from its pains;
For he is in danger who sips—
He only is safe who abstains.’

The anti-poison hymns were printed adjacent to the anti-slavery ones.

He attacked ‘the new doctrine of compromise,’ and organized the Wesleyan Methodist Connection in 1843.

‘John Wesley and his coadjutors in England, braved public opinion. When Mr. Wesley was expelled from the churches, he preached in grave-yards, public markets, and open fields! And though public opinion commanded Mr. Wesley to desist through the medium of mobs, still he stood it out! Shame on his compromising sons!’

See: “Word to a Drunkard” by John Wesley.

‘As the pastor of a small company of [Wesleyan Methodist] Christians worshipping in this city … whose terms of membership require total abstinence from all intoxicating drinks—and non-fellowship for all slave-holding, I am more than content with my lot.’

‘We may not innocently stand by and permit the infliction of injuries by others’ ‘by forces, both moral and legal, we prevent all others from the worse than murderous traffic in liquors that can intoxicate.’

Nathan Bangs, in A History of the Methodist Episcopal Church (1838) quotes the Minutes of the 1780 Methodist Conference in Baltimore against slave-holding and alcohol:

‘By these minutes it will also be seen that the preachers of the day set their faces against “distilling grain into liquor,” determining to “disown those who would not renounce the practice.” From this it may be seen that the Methodist conference set itself against the use of alcoholic liquors long before the temperance movements, which have so distinguished the present days, and which have conferred such lasting blessing upon the community. What a pity that there should ever have been any relaxation of this rule!’

The 1892 Discipline mentions the publication of Sabbath school papers including “Our Temperance Paper” for Sunday Schools.

“There should be a Temperance Department in every Sunday-School under the direction of a competent superintendent. The quarterly Sunday-School temperance lessons, literature, programs, addresses and other proper means should be employed to educate the young concerning the direful results of the use of intoxicating beverages and tobacco, and encourage them to sign the pledge against their use.”

General Rules
It is expected of all who are admitted to our churches that they should further evidence their desire for salvation by continuing: …

Special Directions
Prohibition. The Wesleyan Church seeks the prohibition by law of the manufacture, sale, purchase, and use of alcoholic beverages, narcotics, and other harmful drugs, unless for mechanical, chemical, or medicinal purposes.

General Rules and Special Directions from The Wesleyan Church Discipline (1968)

“Ques. Have we any directions to give concerning the use of Tobacco?

Ans. In the judgment of the Wesleyan Methodist Connection the use of Tobacco is a great evil, and unbecoming a Christian, and a waste of the Lord’s money, and a defilement of the body, which should be the temple of the Holy Ghost.” Wesleyan Methodist Discipline (1892). It explicitly said: “We will not receive as licentiates or ministers, nor will we ordain or license to preach or exhort persons who use tobacco.” Also, it did “most earnestly request our members to be clean from its use in all forms, for Jesus’ sake.” From the first Discipline (1843), we read that preachers had always discouraged others from using tobacco in any form.

The 1985 General Conference proposed the ratification of a similar rule: “No person therefore who uses tobacco in any form shall be received to membership in any of our churches or conferences. Any person received to membership under this section, and thereafter becoming guilty of the use of tobacco, shall be proceeded against as in other cases of misdemeanor.” The Discipline (1896) lists these verses under Tobacco: Isa. lii. 11; Rom. vi. 12; xii. 1; I. Cor. vi. 13, 15, 19; II. Cor. vii. 1; I. Thess. iv. 7.

The Discipline (1927) explicitly said it will also “most earnestly require” any members to “refrain from its cultivation, manufacture, and sale, and to abstain from its use in all forms, for Jesus’ sake.” This amendment demonstrated foresight – lest future non-ministerial members try to make excuses for using tobacco – even though its use had already long been denounced as “a great evil, and unbecoming a Christian.”