In 1881, A.B. Simpson started what is now the Christian & Missionary Alliance.

A.B. Simpson vs the fiery influence of alcohol

‘The work of alcohol is to set on fire the passions of men, and it is perhaps the best figure that can be selected, of that fire which is never quenched [Mark 9:43-48].’

(A.B. Simpson, Natural Emblems of Spiritual Life, The Harvest Of The Earth)

‘In ancient times the fruit of the vine was used without fermentation. [Jesus spoke of the “fruit of the vine” at the Last Supper: Matt. 26:29; Mark 14:25; Luke 22:18] It is the mixture with leaven and corruption which has made it such a curse. The devil does not use evil things to harm the world, but good ones. He has taken the vine and cursed the world with it… and trying to turn every good thing to some evil use, that he may dishonor God and curse man. As he has turned the beautiful vine into accursed alcohol … has changed the fruit of the vine into the very wine of hell.’

(A.B. Simpson, Natural Emblems of Spiritual Life, The Vine and Its Branches)

‘The sin of drunkenness is discussed. “Woe to those who are heroes at drinking wine and champions at mixing drinks” (Isa 5:22). It is not so much the vice of becoming drunk that is here denounced as the power to drink like a beast and not get drunk. It is the sensual animalism that can load itself with liquor and lead others into stupid, beastly insensibility, and yet glory in its own self-control and ability to drink without limitation. This is downright beastliness, and yet the picture is not hard to find in our Christian lands, which, above all other lands, are blighted and disgraced with the curse of drunkenness. The woe that Isaiah here pronounces is one that reverberates through all the centuries of the corridors of time, all the vaults of hell. It is the saddest wail ever extorted from human sin and sorrow. It is indeed the devil’s most dreadful curse upon lost humanity, and fearful indeed will be the punishment of every man and woman that has any part in spreading it among his fellowmen.’

A.B. Simpson, Christ in the Bible, Isaiah 8, ‘The Parable of the Vineyard,’ ‘The Sin of Drunkenness’ at http://biblesupport.com/)

From the outset, Simpson worked with reformed drunkards. He would lecture at the Evangelistic Training School of the Woman’s Christian Temperance Union.

‘Only seven persons were present at his first meeting which was held in November, 1881, in Caledonian Hall, Eighth Avenue and Thirteenth Street. One of this number was Josephus Pulis, the reformed drunkard, of whom Mr. Simpson afterward said that he was once the greatest sinner but now the sweetest saint in New York City. From this first meeting until his death in 1914 Mr. Pulis was closely associated with the work.’

‘The Gospel Tabernacle was the center of the ever increasing ministry which radiated from the life of Dr. Simpson until he rested from his labors. Here unnumbered thousands have been saved, sanctified, healed, and inspired by the Blessed Hope of the near coming of the Lord. It still continues to be the most aggressive center of evangelism in New York City. The poor are always welcome, and not infrequently drunkards stagger in through the corridor and go out saved by the grace of God.’

A.B. Simpson on loving neighbour instead of loving drink

‘I may be perfectly free myself to do many things, the doing of which might hurt my brother and wound his conscience, and love will gladly surrender the little indulgence so that she may save her brother from temptation. There are many questions which are easily settled by this principle. For example, the use of stimulants, which in the judgment of some is forbidden by Scripture, yet to other intelligent Christians seems to be an open question, and they argue that the Bible does not prohibit the use of wine.

Supposing that this were even so (which we only admit for the sake of argument), still the higher law of love would lead them to abandon the use of stimulants because of the harm they do, and the inability of thousands to withstand the temptation.

So there are many forms of recreation which in themselves might be harmless and, under certain circumstances, unobjectionable; but they have become associated with worldliness and godlessness and have proved snares and temptations to many a young heart in life; and therefore, the law of love would lead you to avoid them, discountenance them and in no way give encouragement to others to participate in them.’

A.B. Simpson, Christ in the Bible, Romans 14, ‘Consecration in Relation to Our Duty to the Weak and Erring,’ ‘The Test of Faith’ (at http://biblesupport.com/)

‘We are frank to say that we believe alcohol, like leaven, to be forbidden in the Scriptures as a beverage because it involves the principle of fermentation, but we know many excellent men and women who do not believe this. Many biblical expositors contend that the Scriptures do not condemn fermented wine in itself. Assuming, for the sake of argument, that this may be so; still the greater question arises, what is the effect of this indulgence on innumerable lives, and what may the effect of our example be upon others? There can be but one answer to this question, and on the ground of love the sensitive conscience will be prohibited from the use of that which may become a stumbling block to a brother.

The same principle may be applied to the horse race, the theater and the dance. We know of many painful instances where young men that have been saved from the world have been led back to the horse race and the intoxicating cup by the example of their Sunday school teacher or some Christian friend.’

A.B. Simpson, Christ in the Bible, 1 Corinthians 5, Section 3, ‘The Christian in Relation to Society’ at http://biblesupport.com/)

‘Why has God made all the remedies we find in nature if He does not intend us to use them? Perhaps He did not make them any more than He made beer or whiskey. God made the barley and man made the alcohol.’

A. B. Simpson history 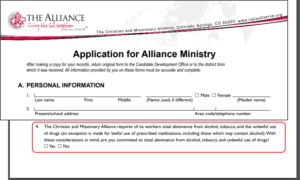