I ought to be able to make a speech with such a text; but it seems, as The General has said, to have taken all the breath out of me. I hardly know what to talk about. 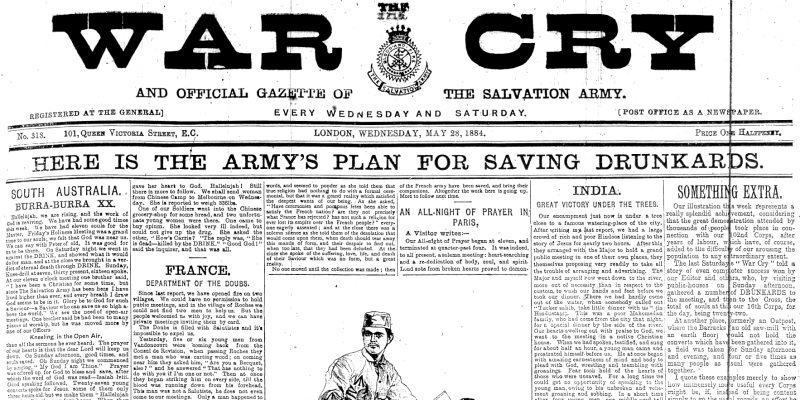 I feel very grateful to those friends who have helped us in this emergency, and so thankful, so unspeakably thankful, for the money which will lift us out of the difficulty, and enable us to oil the wheels, to

in the roads of Salvation, picking up such trophies as those you have heard to-night, and extending this glorious work right round the world. I feel unspeakably grateful to all who have helped us; and I hope that you will not only help us, but I hope that the testimonies to which you have listened to-night will show you the importance of individual effort, of direct effort, for the Salvation of the poorest and the lowest sunk, the most

of the human family. I also hope that you will never after this deem any man or any woman too bad to be saved; but that you will believe that, with the right instrumentality, and the right measure of the Holy Spirit, the necessary degree of Divine power brought to bear upon the very lowest and the very worst, God can out of them make such trophies of grace and of Salvation as these sitting behind me.

I said to my dear husband—“Oh! Don’t stop them; they can hear me at any time; I am an old song;

Let them go on;

I do enjoy all their testimony.”

I feel quite to grudge taking up five minutes of the time to-night. I would rather have heard their testimonies, because I know that there are hundreds more quite as thrilling as those to which you have listened, and I feel that there is nothing like letting the work speak for itself. I judge movements and doctrines as I judge men—by their fruits [Matt. 7:20], and while we can show such fruits as these I say The Salvation Army has nothing to fear from earth or hell. We have only to go on multiplying these results.

But just a word on this subject, on which most of our testimonies have been given—

This Dreadful Subject of DRINK.

I was announced to say a word on DRINK, and I have been thinking, as I sat here, surely it does not need any more words to convince you on such a subject; surely every reasonable person, every benevolent person, must see the desirability of saving such people as these, and I should think also of saving our young men and women from becoming such.

I heard about an argument which took place—here, I think—the other day. Somebody had been asking what was

The Remedy for DRUNKENNESS.

Well, I think you have heard about it to-night. I say the remedy for DRUNKENNESS is to abandon DRINK. (Volley.) There is only one remedy, and that is to let it alone altogether. (Volley.) I think that every Christian in this Hall must see that it is just as unreasonable to expect to save the masses of this country from such effects of DRINK, from such extravagance, from such immoderation (if you use the term) in DRINK—just as unreasonable to expect to save these people from the effects of drink, while the respectable, religious people of the country patronise the drink, as it would be to expect to save the inhabitants of China, the low, the weak, and ignorant, from the undue consumption of opium, while all the respectable inhabitants patronised it and used it.

It is the DRINK that Makes the DRUNKARD;

It is the “moderate use,” as you call it, of intoxicating DRINKS that prepares the young men of the country to step into the places of such as you have heard to-night. I have heard a good deal of the DRINKING classes of the country, and I dare challenge these 500, or any other 500—yea, any 5,000 or 50,000 DRUNKARDS of this country—I dare challenge them to say that any one within their ranks made up his mind to become a DRUNKARD, and deliberately sat down to make himself a DRUNKARD all at once.

How is it that I have no sons and daughters DRUNKARDS? Because I never prepared them to be so by the “moderate” use of DRINK. I feel sure that if I had allowed my children to grow up in the “moderate” use of intoxicating DRINKS, some of them—with their fiery and impetuous temperaments—would have become DRUNKARDS. But God gave me sense at seven years old to know the right course for all right-minded and benevolent people, even if they had no fear of ever becoming DRUNKARDS themselves—that the right course for them was to wash their hands from the DRINK, and I did it, thank God, and I have kept my hands washed from it, and I intend to do this to the end. (Volley.)

I say that this is the way to save DRUNKARDS, and to save others from becoming DRUNKARDS—to persuade them to abandon the DRINK. I wrote fifteen years ago and said then, and it is still more true—if it could be doubly true to-night—that the time has come when the Christians of England ought to assert that the “moderate” use of intoxicating DRINKS

Is Irreligious and Immoral.

(Volley.) Not DRUNKENNESS, but the “moderate” use, if there can be a “moderate” use of an evil, which I deny. I say there cannot be a “moderate” use of an evil thing. Strong DRINK is proved to be an evil thing by such results as these multiplied by tens of thousands, and the introduction of it under any clime, amongst any tribe, savage or civilised—no matter under what circumstances—the introduction of strong drink has invariably been the introduction of misery, vice, and crime. And this has been true with respect to all countries and tribes under the sun, and I say that if such results follow, strong drink is an evil thing—and you cannot have the moderate use of an evil thing—and therefore no Christian has any right to patronise it or to use it, or have anything to do with people who sell it or make it, or any of the houses wherein it is sold, but should wash their hands of the accursed thing. (Volley.)

And The Salvation Army, despised as we are for ignorance, and looked down upon because they say we have not got much intellect, or much science, or much modern thought—thank God we had sense enough, and science enough a long while ago to find out that if you take enough of the DRINK you will be a DRUNKARD, and if you let it alone you won’t be one; and we had science and thought enough to find out that there was no safe way to keep, conserve, and improve and sanctify the converts of The Salvation Army, but by making it a condition of membership that every Soldier in The Army should abandon the use of it. (Volley.) Our friends said, “You cannot do it; you will make it too tight, nobody will stop with you, you will lose thousands that otherwise you might have in your ranks.” “No doubt,” we said, we shall lose

The shilly-shallying people, and the people who indulge; but we will look after the quality and the quantity will look after itself; we will have nothing to do with the vile abomination, and every Soldier in The Army shall be an abstainer from intoxicating DRINKS. (Volley.) And so I reckon that The Salvation Army, at any rate, is a grand band of DRUNKARD-reclaiming people, and a DRUNKARD-preventing people, who, to a man, are training their children in abstinence from DRINK, as from all other evil things, as God gives us the light; that our principles are total abstinence, not only from DRINK, but from all evil things, and we would as soon think of patronising brothels as we would public-houses. We would just as soon think of patronising the one as of sending

Our Servants and Children

into the other. We have nothing to do with them. (Volley.) We consider that they go hand-in-hand, and we consider that the one plays into the hands of the other, and the devil would have to close half of the one if the others were closed. And, therefore, we have done with the DRINK, and we think it is our duty, with our present light, and the awful facts that are before us, to totally abstain. (Volley.) Oh, as I can read

and as I read about the dwellings of the poor in London, and read that at every fifty yards there was a public-house, I said, “what is the use of their talking, and committeeing, and shilly-shallying about these measures, while they leave these public-houses open as traps for the pour creatures who go there to get their stomachs warmed when they have not enough money to buy food?” I say the Christians of England must get their hands rid of the DRINK, and then they must rise up and demand that the Government shall take away these temptations, and that The Salvation Army will help to do it. (Loud cheers.)

“I judge movements and doctrines as I judge men—by their fruits [Matt. 7:20]” See how very often Catherine Booth speaks of the fruit of doctrines in The Life of Catherine Booth, The Mother of the Salvation Army, Volume 1 & Volume 2.